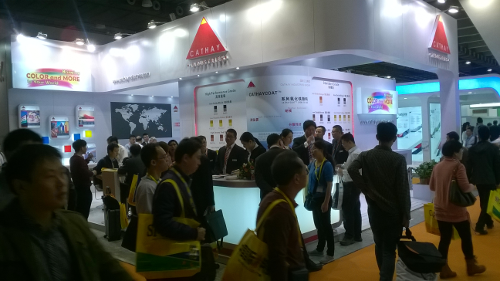 This year’s Chinacoat was held in GuanZhou, Guangdong Province, China, from 3 to 5 December. The visitors’ traffic was enormous and many representatives of global, regional and local coatings manufacturers and pigment users found their way to the booth of CATHAY INDUSTRIES Group. The company exhibited its portfolio of pigments from the CATHAYCOAT™ range together with a number of products completing the package for the industry.

Particular interest was shown in CATHAY's high chroma reds that allow the user to broaden the color spectrum based on iron oxides. Whilst this product range enjoys an increasing demand, the company announced recently the expansion of its capacities to keep up with the growing consumption.

“It was surprising as well as very satisfactory to see how many Europe based customers have found their way to GuangZhou this time”, says Axel Schneider, Head of the Group’s European activities. “We were very glad with the meetings that will form an important step of the growth path we are continuously going.”